Some thoughts about Superman Special #1 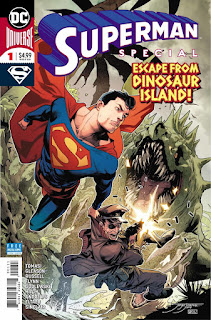 Is time for Superman and Superboy to fulfill their promise.

Both Clark and Jon had to leave Captain Storm on Dinosaur Island to escape and now they will have to come for him to give him another chance to live.

I guess this serves as yet another conclusion to Peter Tomasi and Patrick Gleason's Superman run.

The writers finally resolve one of the hanging plot-points from their early work, one of that was created in honor of the late Darwyn Cooke about Dinosaur Island and the constant fight of Captain Storm to survive in that terrible place. The story itself gets the job done in giving all these characters a happy ending with solid characterization and charming moments. Mind you, is not necessarily perfect since while it gives us some glances about how Storm is out of this time and might not be able to get accustomed to it, it still doesn't explore too much about it. They might be saving it for future stories. At least it gives us an appropriate "Whatever Happened to the Man of Tomorrow?" ending.

Scott Godlewski handles the art and is really good thanks to the expressive characters and solid storytelling.

Since this is a special, there are also a couple stories in addition. The first comes from Mark Russell which probably is the best of the bunch by showing us Superman's values and how good parenting can create some of the most compassionate people in the world. The heartwarming moments make things even better. Bryan Hitch's artwork is not the best but it's serviceable during the right moments.

Then the special concludes with a story by Ian Flynn curiously enough, about the Atomic Skull which is cool since I've been enjoying his new direction as a reformed man in books like Superwoman and this teaches us about second chances and how people can surprise you. Not really impressive but is decently-written. Hope this direction continues. Kaare Andrews' artwork is always good to see thanks to the unique style and strong storytelling.