Some thoughts about The Flash/Speed Buggy Special #1 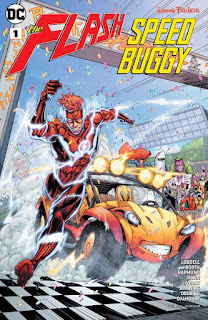 Wally West will need the unlikeliest ally to save the Speed Force.

Dr. M. Blanc has created the fastest machine alive and now is asking for the help of Wally West to face common enemies.

The crossover continues and while I was kinda underwhelmed with Black Lightning/Hong Kong Phooey, I'm happy to say that this one is much better executed.

Scott Lobdell brings the bizarre encounter between Wally and Speed Buggy and is bizarre mostly because I'm not quite if this happens in the current DCU or not. I mean, it clearly has a huge influence from the post-Rebirth continuity but on the other hand we also see characters like Bart Allen, Bar-Tor, Jesse Quick and Savitar appearing here while others like Linda Park seems like they've finally remembered Wally and their relationship is back to normal. Oh, and the rest of the Hanna Barbera characters appearing doesn't make things any less confusing. I guess is an amalgam of universes as a whole.

This actually works better as a serious story since Lobdell tries to create a believable explanation for Speed Buggy's appearance in the DCU due that Dr. M. Blanc (a clear reference to Speed Buggy's original voice actor, Mel Blanc) created the vehicle inspired by the Speed Force which attracts the likes of Savitar along with fun "Reverse" versions of SB while connecting him to his original history.

Brett Booth's artwork is solid during the speed scenes as usual but at times it looks a bit rough.