Some thoughts about Justice League: No Justice #4 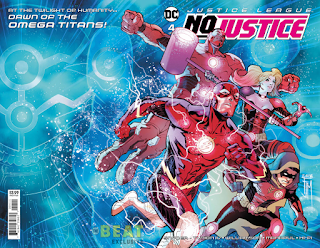 The different teams are trying to stop the Omega Titans but even if they succeed they will soon realize that this must just the beginning.

This is the end people. As I already mentioned, I haven't been a fan of this miniseries so far and while this works a little better than the first 3 issues, it still showcases the problems with this miniseries.

Scott Snyder, Joshua Williamson and James Tynion IV deliver the final chapter of this event by focusing on the characterization and resolution of this conflict. The best part are the character dynamics since the interactions between the whole cast demonstrates more complexity than before, particularly when the cast reacts to the whole situation and their new mission to protect the entire universe and speaking as a fan of the Martian Manhunter, I'm glad that he's finally receiving the role he deserves.

That being said, this is the biggest problem with this whole "story" since is not really that much of a story as much as a set-up for the upcoming new Justice League line. The Omega Titans were not that much of an interesting threat and here they're defeated rather quickly and in a kinda underwhelming manner. In fact, a lot of the issue is dedicated to prepare these characters for the new teams that are going to be formed in the future and in that sense it gets the job done but it doesn't make me buy this as an actual engaging tale.

Francis Manapul's artwork is outstanding though, nothing to complaint about it, beautiful cosmic settings and characters.

Not bad, not great, at least I hope the new books are good.
Publicado por Comic Obsessed en 06:24