Some thoughts about Doomsday Clock #5 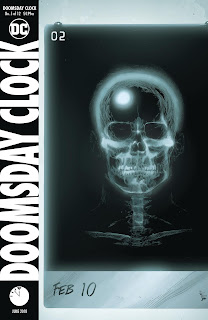 Who is creating Gods in this planet?

Ozymandias' plans are taking a twist he wasn't expecting and somebody has apparently been creating metahumans around the world which is causing it to go to hell.

This one took a while to be released but boy, was the wait worth it.

Geoff Johns continues his story of epic proportions by showing the strong understanding of all of these characters that he has demonstrated since issue 1. The character work is especially great thanks to all the wonderful scenes that emphasize the personalities of the cast perfectly, some of my favorite moments are focused on the interactions between Ozymandias and Batman, and how their missions clash with one another in a really compelling manner. Other characters like the Comedian, Mime and Marionette continue to shine in every scene while even characters who only appear for a brief moment like Black Adam receive a pretty solid portrayal.

Not only that but the plot is developed as a mystery that didn't initially appear as such. The idea that something has been going wrong in the main DCU for a while is a pretty intriguing one and that apparently involves one of the world's greatest superheroes. That's without mentioning all the references to the bigger picture about this world where superheroes from Russia are created including classic ones like Red Star which starts to draw parallels to what happened in the Watchmen universe. It all seems connected.

Gary Frank remains a master of storytelling by delivering strong scene after strong scene with fantastic character expressions and elevates the script even more.

Outstanding issue as always, shame it has to take so long for the next one.
Publicado por Comic Obsessed en 05:18