Some thoughts about Batman #47 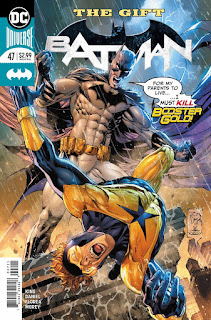 Can Booster Gold save the world?

Booster has changed the timeline for the worst and now he will have to fix everything by letting die the most important persons in Bruce Wayne's life.

Yeah, this pretty much went as expected.

As you might remember, last issue was atrocious, one of the worst things that I've ever read both in terms of dialogue and overall story and while this one is not necessarily worse, is not better either. Tom King delivers the conclusion of this time traveling adventure where Booster continues to talk like a crazy person (although let's be honest, there's not much difference between how King makes either sane or insane people talk), every line that comes out of his mouth is simply terrible and automatically puts me out of the story.

And speaking about the story, this doesn't make any sense either. At this point in his career, Booster understands that changing the past is wrong and doesn't bring good consequences in any way so the premise of this entire arc immediately fails no matter his "good" intentions. It's just bad characterization for the sake of justifying a theme and yeah, that's something that I haven't said about King's run in a while despite that I really should have.

Other than that, this is another example of how supposed "creativity" can create one of the most horrendous things ever imagined.
Publicado por Comic Obsessed en 03:57