Some thoughts about All-New Wolverine #35 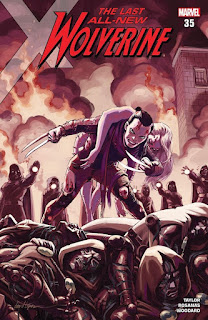 Wolverine will have to do the ultimate sacrifice to preserve the future.

Doctor Doom has captured several heroes including Laura's sister and now she will have to find a way to finally finish all this.

Here it is, the finale of this series. I have to admit that after the whole Earth 2 debacle, I didn't have the highest opinion of Tom Taylor's work, I always knew that he was a good writer but that run simply killed most of my interest in his other projects but I decided to gave him a chance and I'm glad I did.

This without a doubt has been one of the greatest Wolverine runs that I've ever experienced. I was really interested in Laura taking the mantle for a while but I was never expected to become this good. The amount of humour, action, story and HEART that Taylor was able to inject into this series is nothing short of admirable and this last chapter is a clear proof of all that.

The final battle between Laura and Doom begins and it focuses on all the suffering that Laura has endured due that she's actually dying. The writer manages to create a logical and satisfying resolution for this conflict while also giving all the members of the cast their time to shine and even creating a few fun homages to the Avengers films.

Even the ending presents a solid twist that goes against what this arc was teasing which might seem a bit like cheating but at the same time, I'm glad it happened this way.

Ramon Rosanas handles the art and is fantastic thanks to the good character expressions, clean style and clear storytelling.