Some thoughts about Green Arrow Annual #2 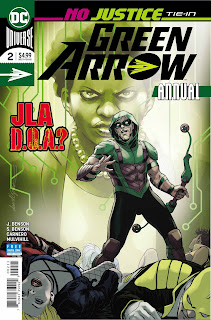 What can Green Arrow do when the Justice League is gone?

The world's greatest superheroes have been defeated and now Ollie needs to find a way to save all of them but his human nature might not be enough to do so.

This is it, the official beginning of a new run, this time handled by both Julie and Shawna Benson. As you might recall, I initially liked their Birds of Prey run but that was mostly for the characterization because the book quickly devolved into uninspired and dull stories that were not worth paying attention to. With that in mind though, I think they have started decently here.

This story takes place in the middle of the Justice League: No Justice miniseries where the rest of the Justice League is in other planets trying to stop the Omega Titans from destroying the universe while the other heroes on Earth are being defeated one by one. I think the best part of this issue is that the Bensons at least seem to understand the human aspect that has been important in Green Arrow books for years now (at least much better than how Ben Percy did) and thus they emphasize that aspect constantly by making him survive several obstacles to try to achieve his mission of saving the world. Is good characterization, not particularly complex mind you but pretty on-point so far.

This also works as a set-up for the writers' upcoming run due that they create a plot-point here that puts Oliver in an interesting situation that gives him a bigger responsibility than ever before. It's an intriguing enough premise and I wonder how is going to be developed.

Carmen Carnero handles the art and is really solid thanks to the detailed character expression and strong action scenes.

Oh yeah, and this Annual included the Arrowplane, that's enough to make me like it more than anything that happened during Percy's run. So far, so good Bensons.
Publicado por Comic Obsessed en 05:37