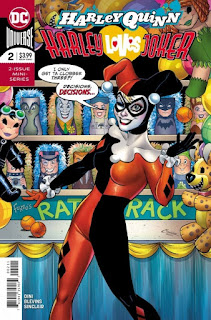 Does the Joker truly love Harley?

Harley has been jealous of the current relationship between the Joker and the Grison but her inner self will remind her that she deserves better than this.

This is actually a pretty appropriate ending for this miniseries and arc.

Paul Dini concludes this story by showing great characterization and solid comedy at the same time. There are few jokes here and there, some of them consisting of dark humour, references to the Batman Animated Series and silly moments, I'm particularly fond of the scene where Harley calls Wayne Manor trying to pass as another person and Alfred responds "How did you get this number Ms. Quinn?" and her answering "IT'SNOTMEBYE!", pretty simple yet effective.

The highlight is the character work though since Harley has several inner conversations in her head where the current version of Harley appears showing how she could over her abusive relationship and become a better person which pays a lot of respect to the work that Jimmy Palmiotti and Amanda Conner have done over the years and feels really fitting. Of course, this story ends in an ambivalent way but we all know what's going to happen at the end.

Bret Blevins handles the art and is still perfect for this book thanks to his cartoony style which is particularly good when it homages the Animated Series.