Some thoughts about Man of Steel #1 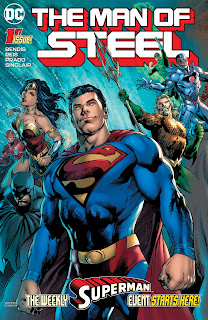 Somebody is hunting the Man of Steel.

Rogol Zaar has seen the Kryptonian race as a threat for years and now that he has learned that there are survivors, he will do anything in his power to conclude his job.

This is it, the proper beginning of Brian Bendis work on Superman. While the segment in the last special was just a set-up, this serves as an actual opening for a plot that could involve the whole DCU and in that sense, I would say that it works a little better.

For one, the characterization is much more enjoyable here. If there's something that I can say about Bendis is that, well, he's a funny writer for the most part, he tries to inject humour in most of his stories and while sometimes he goes overboard, here it is much more tolerable and appropriate for the character. There are jokes that involve Superman's classic powers which work well in their different situations, not only that but they also manage to include decent characterization for some of the new members of the cast that are just being introduced. The dialogue works pretty decently here as well which is a relief.

The story is still not that interesting to me though, particularly the segments that involve the main villain but everything else was pretty solid and compensated for those other little moments. That being said, the story doesn't progress much but I'm expecting it to developed next week.

Ivan Reis and Jason Fabok share art duties and their work is great in their different parts with beautiful characters and strong storytelling.