Some thoughts about Avengers: Infinity War 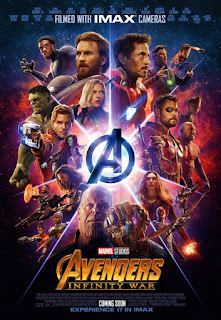 The universe could lose everything.

Something has been on Tony Stark's mind all these years, a menace that forced the Earth's mightiest heroes to be reunited for the first time and now that it's back, this could be the last.

I'm not kidding that this is a story that has been building-up for almost a decade.

People who are fans of the Marvel Cinematic Universe know that it basically began with the 2008's Iron Man movie which lead to the introduction of several other classic superheroes along with many other franchises to the big screen which created one of the most popular flicks in the genre in the form of 2012's The Avengers film. Now however, everything comes full circle with a story that is by far the biggest yet and surprisingly enough, is pretty successful in what it tries to accomplish.

What do I mean by "surprisingly"? Well, most of the movies from this line have been solid at worst aside from a clear exception: Avengers: Age of Ultron which was quite disappointing in most of its execution due that Joss Whedon couldn't replicate the kind of solid character work and plot from his original film and instead forced really awkward directions and twists. This time though, Anthony and Joe Russo are inspired by some of the best aspects of the first crossover and deliver in all fronts.

The plot is something that most fans should know at this point, Thanos has finally arrived which is something that has been heavily hyped in many of the previous stories and his objective are the mysterious Infinite Gems that will give him the power to do whatever he wants with the universe. This story is based on the classic The Infinity Gauntlet crossover comic written by Jim Starlin but it differs in many key moments.

The fact that this is called "Infinity War" is for a particular reason, is an actual battle for the Infinity Gems which is quite different from the original crossover since that started with Thanos already having their power. This allows for a pretty great spectacle in which most of the characters in the Marvel Cinematic Universe appear and face the mad Titan in their own way.

I mean "in their own way" because the focus goes to several groups and segments where the protagonists try to do their best to stop the threat of Thanos, sometimes even different times combine their forces during different sections. That's the brilliant part of this movie, it allows for great characterization and interactions between the heroes in a way that exploits perfectly how all of the previous films were created.

When I talked about the Doctor Strange movie I mentioned that he pretty much became "Tony Stark-lite" in a sense so it was fantastic to see both the real Tony and Strange exchanging sarcastic comments and insults with one another while the people around them try to be the voice of reason.

The great interactions don't end there since one of the highlights of the movie starts once that the fan-favorites Guardians of the Galaxy appear and I'm happy to say that the Director and writers did a wonderful job at keeping the humouristic tone of the team as well as their family dynamic (I dare everyone to not laugh at every scene featuring Drax). Gamora in particular receives great character development based on her relationship with Thanos which once again, was perfectly set-up in their own movies.

Speaking of set-up, this film takes place immediately after the end of last year's Thor: Ragnarok and it definitely brings new light to that story since while Thor and his team were thriumphant at the end, that didn't last long since Thanos would quickly kill most of them. That's one of the criticism that I would give to this movie, it kills characters too rapidly to the point that you don't really know much of them if your only source of material is this movie.

In fact, that's the major flaw of this flick, you REALLY need to watch the previous movies if you want to understand what's happening, who these characters are and why you should be invested in their sake which is not much a flaw admitedly since most of the films have been pretty good by themselves but newcomers will probably feel lost at this.

That being said, that's the only flaw that I can find in the plot though since everything else is pretty good. Robert Downey Jr. reprises his role as Tony Stark/Iron Man and he's pretty much the protagonist of the story which makes sense considering how relevant his character has been for all this build-up. Chris Pratt, Zoe Saldana, Dave Bautista, Vin Diesel and Bradly Cooper return as the Guardians of the Galaxy in a way that rivals their previous appearances. Tom Holland once again portrays Peter Parker/Spider-Man and probably does an even better job than during his previous works, particularly one scene towards the end that will shock a lot of people. Chris Hemsworth as Thor continues the new fun direction the God of Thunder took and mixes pretty well with the rest of the cast.

I was pretty surprised that Captain America (Chris Evans) and his team didn't have as much relevance as I would have expected. It was cool to see Scarlett Johansson as Black Widow once again but her role is very little compared to other crossovers. Another surprise is that Chadwick Boseman didn't have a particularly big role after how successful Black Panther was but his part is still decent.

The pleasent surprise in terms of casting was Josh Brolin as Thanos. Considering how hyped the appearance of the cosmic villain has been during all these years, disappointment could have been easily achieved, especially since this was technically yet another CGI monster but Brolin manages to give enough emotion to the antagonist to be believable and has a solid enough reason to at least understand him.

The story escalates pretty quickly with great moment after great moment, all of this leading to the climactic ending which I wasn't really expecting and is really heartbreaking, especially if you've grown fond of these characters during all these years.

The special effects get the job done and is probably one of the best works of the studios in that regard, perfect for the fight of epic proportions like this.

What else can I say? Avengers: Infinity War was everything I wanted and then some, it really surprised me at how entertaining it was and how it was even better than the first Avengers movie. All this wait has been worth it and now we will just have to wait for the climactic conclusion.
Publicado por Comic Obsessed en 19:09