Some thoughts about Michael Cray #8 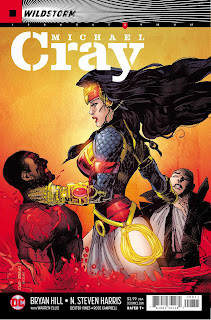 Is Michael Cray in control of his mind?

John Constantine has offered his help to Michael and Diana Prince's influence might be enough to convince him.

Okay, this is working a little better admitedly.

Bryan Hill continues his story about Michael Cray killing psychotic versions of DC heroes and the presence of Wonder Woman turns to be more interesting than expected. In the Wildstorm universe she's apparently leader of a cult who worships her classic pantheon of Gods which is an intriguing idea in and of itself since as this series has taught us, mythos don't work in the same way as in the main DCU and it could be that Diana is simply yet another crazy metahuman. Hopefully this will be better executed than previous examples though.

What I think worked better as well was that Michael's mental illness is receiving a much deeper exploration and creates a surprising twist that justifies the presence of both Constantine and Diana while giving the book a new direction that changes the game completely.

N. Steven Harris' artwork seems to have improved as well due that now it has a much more polished look that creates more pleasent looking characters and scenarios.