Some thoughts about Transformers: Lost Light #18 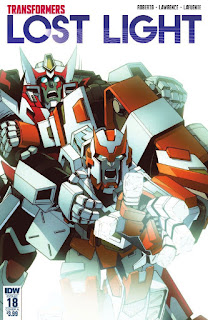 The Afterspark is not what everyone thought.

The crew is ready to ascend but Rodimus believes that there's something strange about this whole ordeal and the truth might be much more terrifying than expected.

Well, this is an interesting conclusion for this arc.

"Interesting" being the key word here since it has both good and not so good aspects. James Roberts not only reveals the true nature of this "Afterspark" but also basically brings the entire journey of these characters to an end. The characterization is pretty solid, particularly when it deals with the cast finally finding happiness with their missing partners only to be quickly taken away once that their actual condition is apparent which also brings several emotional moments, particularly from Cyclonus, Tailgate and surprisingly Whirl.

Then comes the underwhelming part and this is something that has been happening pretty much since the end of the previous More than Meets the Eye series. It seems like Roberts in his desire to surprise the readers he simply chooses the most uninteresting answers for most of the mysteries he has been working on all this time. He did it last time with Tarn being the completely forgettable character Glitch but now he goes the extra mile by showing that this is not the actual Afterspark but instead just a medical hub which is fine since I wasn't expecting it to be the real deal, the thing is that is also Cyberutopia, you know, the place they all have been looking for all this time and of course it wasn't as impressive as imagined but at least I was expecting something... more, not just an abandoned center where robots go to die.

Also, Nightbeat died pretty much for nothing an in a rather unremarkable manner. Nice.

But hey, at least there's a twist here, remember how Getaway's crew apparently arrived before them? Yeah, there's a terrible consequence for that.

Jack Lawrence handles the art and is pretty solid thanks to his fluid expressions and artstyle.

Other than that, mixed thoughts, is not bad but disappointing in some ways.
Publicado por Comic Obsessed en 10:43