Some thoughts about The Silencer #6 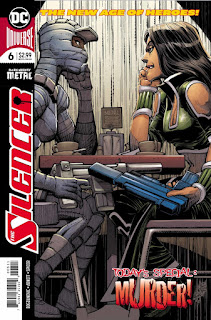 Can The Silencer defeat her former boss?

Hope and Talia will have to fight for their lives not only against an horde of assassins but also against each other.

Well, this didn't work as well as it could sadly.

Dan Abnett offers a new chapter playing with the ramifications of the last one about Deathstroke betraying both Hope and Talia and putting them against each other. There are decent character moments here and there based on the typical conflict the heroine needs to endure to help her son and keep her family safe while also showing classic aspects from the mythos surrounding Talia like how she just can't stay dead.

That being said, this issue mostly centered around action once again and I feel like this is the downfall of most of the chapters from this series. Is not like the action is bad, is just that is not particularly engaging and doesn't offer much character development from anyone. In fact the conflict between Hope and Talia is pretty predictable and focuses on how much the latter wants to control the former.

Viktor Bogdanovic's artwork is fantastic though and makes the chapter worth checking out thanks to his beautiful characters and style along with strong storytelling.

Mixed thoughts and I hope the next one is better.
Publicado por Comic Obsessed en 06:49