Some thoughts about Wonder Woman Annual #2 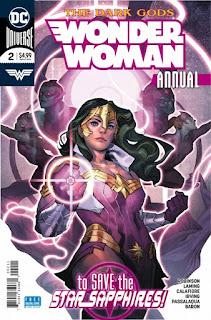 Can Wonder Woman fight the Gods in space?

Diana has been summoned by the Star Sapphires to stop a common threat and to do so she will need all the love she can gather.

Well, this worked well on some aspects and not so much on others.

James Robinson brings this story that he created by awkwardly interrupting the one on Earth. Mind you, the way he connects both makes a little sense at least since Wonder Woman needs to fight one of the Gods from Earth. On the other hand, this makes the whole situation pretty forced since it seems like a weak justification simply because Robinson wanted to tell a story about the Star Sapphires, their connection with Diana is something that I'm glad is being explored but I also wish it would have been executed in a better way.

This is weird because Robinson has shown in the past that he can handle one-and-done stories really well and I think that would have worked much better in this case. If this was only part of an overarching plot instead of being pushed into the current story it would have been more acceptable. Oh, and speaking of classic Robinson ticks, he reintroduces ignored characters like Dela Pharon... only to quickly kill her. Yep, typical Robinson.

Marc Laming, Frazer Irving, Jim Calafiore and Stephen Segovia share the pencils and while most of their styles look really good by themselves, they clash a bit with each other, particularly Irving's.

I like the intention of this story but not so much the execution which is something common in this run.
Publicado por Comic Obsessed en 07:24