Some thoughts about Titans Special #1 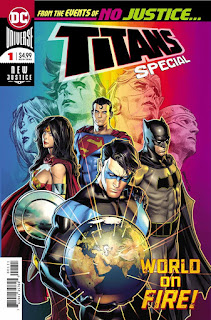 The Titans are over or are they?

Nightwing didn't have good luck with his previous team but now that the Justice League actually needs a group dealing with new metahumans, this might be the right time to start again.

A new direction begins for this book and while I had complaints about Dan Abnett's previous stories and this one is not exactly perfect, it still starts decently enough.

The premise is interesting since like most of the other books, is centered around the ramifications of the events of Metal and No Justice with people around the world gaining superpowers without understanding them. The idea is about how the previous Titans team failed because it was too much of a family and how the new one is created mostly as a job brings back memories about the pre-Flashpoint's  Titans/Outsiders titles so in that sense, is a logical development.

That being said, some of the characterization can be a bit off like how Dick Grayson of all people can't read when a person is scared which doesn't make much sense since he's one of the most empathetic heroes in the DCU and is mostly seems like an excuse to bring Raven on board. I'm also not exactly optimistic about how the lighthearted Beast Boy is turned into a monster unsure of his own abilities which is ought to bring unnecessary angst to the character.

On the other hand, the development for a lot of the cast is pretty decent as well, particularly how Donna is brought back into the mix and showcases solid character segments while the introduction of others like Natasha Irons and Miss Martian made them really compelling already.

Overall, this works as a set-up obviously but gets the job done in terms of character and presents an intriguing direction and threat. Hope it ends-up being better than the last storyline.
Publicado por Comic Obsessed en 06:19