Some thoughts about The Flash #74 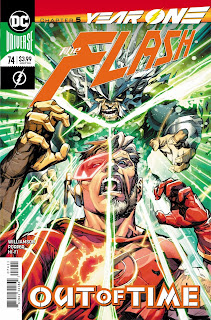 Can The Flash protect the present from the future?

The Turtle has came back to the past and is decided to conquer this time just like he did with his and even Future Barry doesn't believe they have a chance.

The penultimate chapter is here and things are escalating appropriately.

Joshua Williamson offers a new installment and he focuses on both character work and plot progression. The final battle against The Turtle is being prepared and the conflict between Present Barry and Future Barry is quickly stated because of their beliefs about they should do.

This of course leads to the most important part of this issue, the character development. Present Barry remembers all those times he never did anything but accept things as they were including the death of his mother and at the end of all that decides to follow his mother's advise about always having hope no matter what which is a classic Flash theme and one that fits the story adequately. The references about old heroes like Jay Garrick are also appreciated.

Howard Porter remains in art duties and his work is still powerful by depicting every scene in the most kinetic way possible.