Some thoughts about Freedom Fighters #7 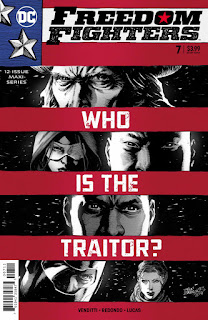 The Plasstic Men are getting more dangerous.

The Freedom Fighters are hiding from the Ratzis without knowing that one of the people involved has sold them out.

The cover is a bit misleading but this is still a pretty damn solid issue.

Robert Venditti offers a new installment where he continues to play with the idea of the Freedom Fighters being terrorists. I like how he's exploring the fact that the Ratzis has a Cyborg Overman of all things because their own has abandoned them while the team is trying to trust others to keep them safe. This leads to a pretty interesting conflict for the common people since some of them want to help the Freedom Fighters while others are too afraid to get involved.

This is emphasized because of how terrifying the Ratzis can be, particularly the Plasstic Men who have really impressive powers and don't care who gets in their way which makes their end pretty satisfying. Speaking about the cover, I don't think there's a proper "traitor" but someone disguising as one of the team which is not as interesting but still should be nicely developed.

Bruno Redondo handles the art and is pretty good looking with a clean style and precise storytelling.