Some thoughts about The Terrifics #18 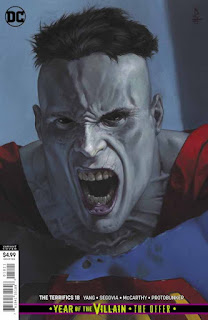 This might be the final challenge for The Terrifics.

The team is trying to defeat their best to defeat this God-like entity but even if they manage to do so, their problems are just starting.

Yeah, I'm officially not digging this.

Gene Luen Yang concludes this opening arc but does it in a way that is not particularly satisfying. The conflict with the deity-like creature presents an interesting challenge for the team, especially considering the logical and Atheist Mister Terrific who contrasts nicely with his recently found wife who turned out to be a believer. THE PROBLEM is that the actual execution is not as good as its premise due that while the plot presents potential, is never developed as creatively as I would hope due that there are very few memorable moments and not even the team dynamics are as engaging as before, definitely not compared to Jeff Lemire's run.

The worst part comes at the end though since Mister Terrific ends-up having a discussion with his wife about their different beliefs which is mostly for the sake of creating drama and goes completely against Lemire's intention by bringing her back. Lemire's Mister Terrific (or just him in general) has always missed his wife and I find hard to believe that he would disregard her thoughts simply because he wants to play God now.

Oh right, and there's also yet another Year of the Villain segment which involves Bizarro... for some reason. At least other tie-ins tried to use villains who appeared in the title before but Yang didn't even bother with it.

Stephen Segovia handles the art and is solid with clear storytelling and intense action scenes.

Boy, this didn't turn out well. Not sure what to expect next.
Publicado por Comic Obsessed en 12:43