Some thoughts about Aquaman #50 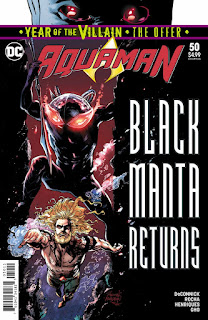 Is Aquaman ready to return home?

Arthur has finally remembered who he is and is going to regain his life but first of all he needs to know what is going to happen between Mera and him.

An oversized issue that is celebrating that this series has reached 50 chapters... but as we all have seen, there's very little to celebrate in Kelly Sue DeConnick's run due to how boring it has been as a whole and, while this installment has more content, it doesn't fix the major problems here.

Let's talk for example about the beginning that sees the return of Arthur to Amnesty Bay and it makes me wonder what was even the point of making Arthur lose his memory and abandon his home if he was going to return so quickly and yes, I know he technically gained a bigger supporting cast and a few more powers but the whole arc was so dull that it almost felt like a waste and thus, I'm not really invested in these new additions.

This leads to the protagonist thinking about fixing his relationship with Mera after he left her once he learned she was pregnant and it doesn't matter if Wonder Woman is here to tell Arthur he was wrong at leaving his wife, it was still a bad decision all-around, especially since this is Aquaman who has a long history of being a good family man. Again, this mostly seems for the sake of creating drama and is just another waste.

Oh, and the whole Black Manta cover is mostly a lie because he barely has any role in the issue or story. He just appears at the end like with all the other Year of the Villain tie-ins receiving an offer by Lex Luthor. Plus, he apparently still wants revenge for his father despite that Dan Abnett tried to made him get over that during his run, more bad characterization.

Robson Rocha and Eduardo Pansica share the pencils and their work is really good looking with a vibrant style and expressive characters.