Some thoughts about Justice League #28 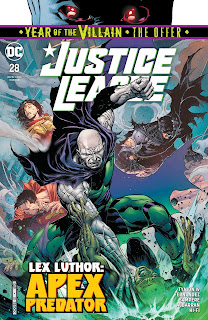 Whatever happened to Lex Luthor?

Perpetua's influence has been so strong that she has been able to convince Lex her plans are the only way to save universe and this could mean doom for the Justice League.

Still not liking this in the slightlest.

James Tynion IV delivers a new installment and pretty much conbines everything wrong with this direction. Let's take for example the fact that this chapter continues to emphasize the connection between Martian Manhunter and Lex which remains as forced as when it was introduced and is not becoming more interesting despite of how much they push it. Second, Perpetua is also extremely pushed and this utterly powerful being who is able to manipulate even the most egocentric person in the DCU and the comparison with Dragon Ball Z and power levels become stronger.

The worst part for me though is how this has changed Lex Luthor. Now he's a complete zealot of Perpetua and is ready to follow her plans no matter what and at this point he's not really Lex Luthor any more. Luthor was supposed to be a relatively grounded person who always put himself above everyone else and so making him just a follower screams wrong to me.

Also, this is just a set-up for an upcoming event. Big surprise.

Not digging it. Will have to endure it.
Publicado por Comic Obsessed en 07:53