Some thoughts about Justice League #24 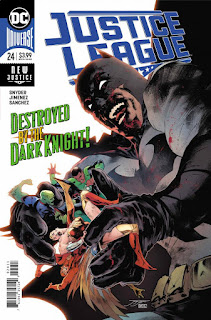 The Justice League will have to fight one of their own members.

Superman is still lost and the rest of the team have figured out how to escape this dimension but Batman is not going to make things easy.

This story continues and there are both good and bad aspects to behold.

Scott Snyder delivers a new chapter where he explores more about this alternate future. The problems that are easy to notice are the usual like the overexposition due that in many instances the characters say more than necessary and makes me wish that Snyder would implement a more "show, don't tell" angle. Geoff Johns is not exactly the most subtle writer out there but even his Justice League run was better in that regard.

That being said, there are still a few things to appreciate like the characterization which shows the villains as more complex people than how they usually appeared during this title and I'm glad this is focused on other antagonists like Sinestro and Cheetah because Snyder seemed mostly infatuated with Lex Luthor and of course, the Joker. There's also good jokes like how both Sinestro and Cheetah give compliments to both John Stewart and Diana respectively and Grodd tells The Flash "I still hate you" which is legitimately funny and perfectly in character for Grodd to boot.

I would have some concerns about the direction they're going for Batman but I think this is mostly a ruse since Snyder usually has a good handle on Bruce.

Jorge Jimenez' artwork is amazing with a great sense of energy and storytelling that elevates the story much more.

Good read as a whole despite of the flaws. Hope the conclusion is appropriate.
Publicado por Comic Obsessed en 05:42