Some thoughts about Naomi #5 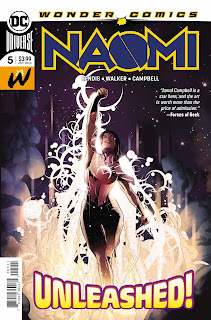 Naomi's truth is about to be revealed.

Naomi has finally learned about her roots and is ready to tell her best friend about it but this might lead to something much worse.

There are equally positives and negatives here.

Brian Bendis offers a new installment where he decides to compensate for the lack of the revelations of the early issues. I'm not kidding when I say that Bendis pretty much went all out with the answers about Naomi's origins and how they're much bigger than anyone imagined. We learn a lot about where she actually came from, who their parents were and how is all surprisingly connected to the Multiverse while also setting-up pieces and characters for upcoming stories.

That being said, let's be completely honest, this pretty much was "Exposition: The Issue". Bendis DID want to compensate for the lack of progress early on but by doing so, he decided to deliver pages upon pages of info dumps that can be pretty obtuse, sometimes they can be kinda hidden because of the conversation between Naomi and her friend but is not enough to avoid their nature. Not to mention that quite a few things that are told in this issue we already knew and so, it feels like some sort of recap which makes it more heavyhanded.

Jamal Campbell's artwork is amazing though with a beautiful and vibrant style that gets the best from characters and cosmic elements.