Some thoughts about Transformers #5 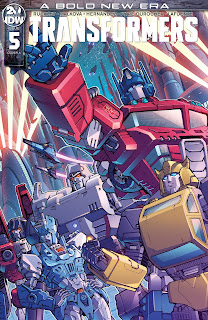 The number of victims are increasing.

The Autobots are trying to be reasonable with the Ascenticons but some of them are going to be hard to deal with and the innocents are about to pay for it.

Brian Ruckley delivers a new chapter where he plays more with the politics of this world. The conflict between the Autobots and Ascenticons is becoming much more problematic because neither of them trust the opposite side, the tension is palpable and while they're not going into full battles, you just know that that will be the next logical step. There's also the little lines that offer insight about the cast and the dialogue continues to be natural enough to not be overly expository about it.

The suspense becomes even greater during the last few pages once that one of the most innocent characters is forced to deal with an actual psychopath and the result is something that makes me wonder how the story will continue and how much worse things are going to get for everyone.

Anna Malkova, Angel Hernandez and Sara Pitre-Durocher share the pencils and their work is consistent during the whole read with clear enough storytelling.

Good read, the pacing is still slow but what we get is solid.
Publicado por Comic Obsessed en 10:28