Some thoughts about Teen Titans #30 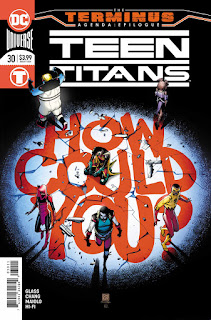 Is this the end of the Teen Titans?

The rest of the team has finally learned about Robin's true plans and most of them are completely against them which could lead to one of their worst fights.

This issue serves as an epilogue of the last crossover with the Deathstroke title and to be honest, this works much better than the actual finale.

Adam Glass appropriately focuses on the strongest points of this book which are team dynamics and character work. The ramifications of the last chapter of this little event are felt among each member of the cast with each one of them reacting appropriately based on their own personalities and how their respective relationships have been building-up so far, the conflict between Kid Flash and Roundhouse is pretty believable because they have been developed as friends over the course of this run while Crush is fighting against Robin not so much because of what he did but because she wants him away from Djinn. Good stuff.

The story itself is mostly centered around the fight and characterization and thus there's not much of a plot per se but it's compensated for the already mentioned aspects and it also leads to one of the most anticipated moments this run has been teasing for a while.

Bernard Chang remains in art duties and his work is still strong thanks to his detailed style that gets the best from characters and storytelling.