Some thoughts about Batman #71 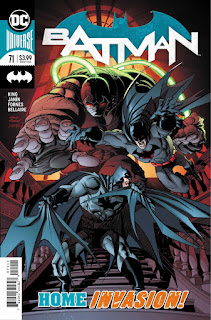 Has Batman been broken?

Bruce has finally gone to meet Bane and he believes he's ready to defeat him but his own allies don't trust him anymore.

This wasn't really as bad as I was expecting.

Tom King is about to end this storyline, at least I hope so, and brings a chapter that plays with the ramifications of everything that has happened so far. The encounter between Bruce and Bane contrasts decently with the encounter Bruce has with his family and shows how Bane's plans have affected him in ways that he's not willing to admit and this is all centered on his failed relationship with Selina which is a logical development at the very least.

There are issues though as you would expect. I was hoping for this story to be over already but it seems like King is trying to stretch every single issue as much as he can to create one of the most unnecessarily decompressed stories in recent years. Add the classic repetition that plagues his books and you get a bit of an obnoxious read. That being said, they're not as obnoxious as before and don't ruin that much the intention of the issue.

Mikel Janin and Jorge Fornes handle the art and while their styles are very different from one another, their storytelling is fantastic and depict the plot appropriately.