Some thoughts about Justice League #50 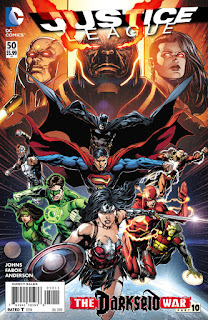 The Darkseid War is about to end but something worse could come after it.

Lots of people have died in the fight and Diana knows that she needs to stop Grail by any means necessary but by doing so, she everyone around her will realize that there are some secrets that have never been unveiled.

The biggest DC event recently has ended and it does it in a pretty solid way.

Geoff Johns brings the final chapter of his story by concentrating on several plot-points that he created during this storyline including some of the most important like the connection between Grail, Wonder Woman and Darkseid as well as little hints that he gave about some characters at the beginning.

The end of the story is an appropriate one that creates a sense of closure for the fight and for the character of Grail but the most important aspect of this issue is the new plot-points it creates, plot-points that are going to be pretty relevant in the upcoming Rebirth storyarc.

Jason Fabok remains in art duties and his work is still beautiful with a great sense of scale that gives this conclusion the bombastic feel it deserves.