Some thoughts about The Flash #39 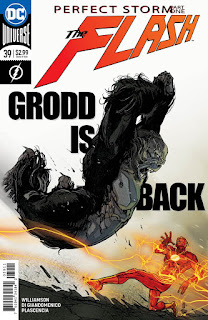 Can The Flash show Iris how much he cares about her?

Barry is decided to share all of his secrets to the love of his life but this could be his biggest regret once that one of her greatest enemies appears.

This issue celebrates 700 installments of The Flash and Joshua Williamson did the right thing by focusing on one of the most important aspects of the character.

The relationship between Barry and Iris receives a huge emphasis in this chapter which summarizes a lot of their most important events in the current continuity which shows how much developments has happened between the two and also creates quite a few charming moments. Perfect way to create an anniversary issue.

That's not the best part though since Williamson also uses this chapter to set up the upcoming event Flash War which escalates nicely towards the surprising end which sadly is not that much of a surprise since the cover pretty much revealed who the big bad is but still, the set-up for his appearance was well-done and in fact uses the abilities of the villain in a pretty interesting way.