Some thoughts about Suicide Squad #4 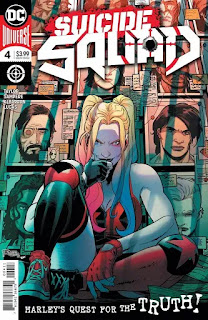 Who is the newest member of the Suicide Squad?

The team has decided to plan against Lok's missions and now they will have to take one of their oldest members.

Okay, this one worked better than last issue.

I had complaints about last chapter because I felt that Tom Taylor was following his usual tactic of "F*ck the classic cast, I'm giving the spotlight to my new characters!" but here he compensates by giving some development to the old members. We start with the inclusion of Captain Boomerang into the story which is always appreciated since I feel like, just like with Deadshot, you can't have a Suicide Squad without Captain Boomerang, he's also decently portrayed, maintaining the mischievus, everyman-ish characterization that I like the best from him.

Deadshot and Harley also get some progression with them realizing that they prefer Waller over Lok and deciding to stop obeying his orders. The rest of the cast also get decent moments about their past. If there's a complaint is that I still don't quite dig the voice Taylor gives to Deadshot but at least he gets more depth this time.

Daniel Sampere handles the art and I think his work gets better and better with each new gig, he has a pretty beautiful and polished style that follows the story perfectly.