Some thoughts about Action Comics #1021 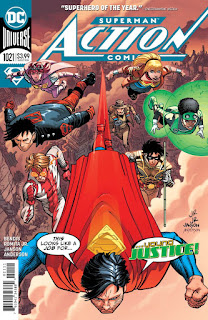 Can this fight finally end?

Superman is getting the aid of Young Justice to put an end to the attack on Metropolis once for all but then, things are just starting.

Yes, this fight actually ends here but it's too little, too late.

Brian Bendis finally finishes this overly-long story that quite frankly didn't achieve anything. Worst of all is that Bendis has been using the ideas of Scott Snyder's Justice League run, ideas that were either misguiden or creatively-bankrupt but what the most nonsensical thing about this is that HE STILL USES SUCH IDEAS DESPITE THAT SNYDER'S RUN ENDED MONTHS AGO!

The only semi-surprising thing about this is that Red Cloud kinda redeems herself but at this point I don't care about her character. Oh, and if you wanted an actual character development between Clark and Conner then I can tell you look elsewhere because Bendis wants to keep overextending the revelations.

JRJR's artwork is decent but clearly rushed, not as polished as his best works.