Some thoughts about Teen Titans #45 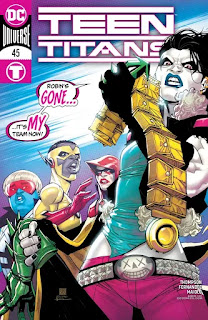 How can the Teen Titans stay together?

Robin has abandoned his team but that's far from their biggest problem since Gizmo is back to hunt them.

Things just refuse to get better don't they?

Robbie Thompson offers a new chapter where the dialogue is simply off. Credit where credit is due, I don't think the lines of the characters are as bad like in the last few chapters since there are a few decent character interactions but then you go to the past where Roundhouse of all people says something like "We're looking for redemption for our sins" with no sense of sarcasm whatsoever and the rest of the cast congratulates him like is some sort of great thing to say and I just cringe to eternity.

The plot itself is just average since is a big hunt quest between the team and Gizmo with some character cameos here and there that barely achieve anything and I don't believe that Thompson will get most of them right.

Javier Fernandez' artwork is solid though with a flexible style that depicts the script as best he can.

Aside from that, I've lost hope and so should you.