Some thoughts about Wonder Twins #12 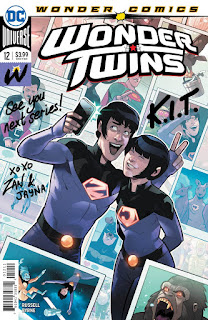 Can the Wonder Twins save the world on their own?

Zan and Jayna managed to help Polly Math and her father but their job is far from over since Lex Luthor is willing to make them pay.

This series comes to a conclusion and my opinion about this chapter is still the same as usual: Is a waste of potential.

I was initially really excited since this is Mark Russell we're talking about, someone who had great success with Hanna Barbera properties as we saw in The Flintstones and The Snagglepuss Chronicles. Wonder Twins however, never reached the same highs as those series since for some reason, Russell apparently didn't want to handle actual complex topics and social commentary and decided to make them as simplistic and dull as possible.

Take for example this issue where Superman is criticizing Zan and Jayna for saving the world because they "didn't follow the rules". First of all, SUPERMAN IS NOT THIS STIFF! He probably would have some problems about them acting behind his back but at the end of the day he would realize that they meant well and did good, and yes, I know that Clark did change his mind at the end of the issue but the fact that there was even this kind of problem is because Russell wanted to force this whole theme of "young people need to teach the old how to do the right thing" to the point of changing Superman's character and opening a bunch of shallow, one-sided topics that I don't even want to talk about.

Not the only problem though since they made the Scrambler, the villain from the previous arc, change bodies with the supervisor of a prison to force yet another theme, this time about how prisons are bad and we need to think about the poor criminals basically hurting and incarcerating a woman and throwing her body into the Phantom Zone because hey, it's cool if they're against us!

Stephen Byrne handles the art and he remains as the highlight with his beautiful semi-cartoony style that I never get tired of.

Aside from that, this is Mark Russell gone wrong. Handling topics in the most superficial manner that he could think of and worst of all, making fans of him like myself completely disappointed about the result.
Publicado por Comic Obsessed en 15:25