Some thoughts about Batman: Curse of the White Knight #7 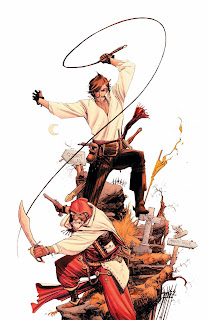 Bruce has learned the truth about the Waynes and now he has decided that he's not worthy of being Gotham's guardian but he's not willing to quit until Azrael is finally defeated.

Sean Murphy is a master at escalation no doubt.

The penultimate chapter is here and it's actually a kinda quiet issue where there's very little action and it's mostly a set-up for the final battle but all of this is done the right way. Murphy implements all the ideas he has been working on over the course of this book and makes them reflect upon his characters, particularly Bruce who realizes how Batman is the reason why he never investigated about the truth of his own family, because he forgot he was a Wayne. This leads to an interesting and even realistic take on the Dark Knight, something that Murphy has been emphasizing over the course of his work on this universe, about how this Batman is flawed, his crusade has consequences and yet he's still willing to recognize that and pay the price for it.

The character dynamics continue to shine since the conversations between the whole cast expands upon the previous ideas, motivating Bruce to follow his own path, the right path and preparing for the upcoming battle against Azrael where he might be forced to broke his main rule.

Murphy's artwork remains wonderful with a gothic and detailed style that gets the best from both characters and storytelling.