Some thoughts about The Green Lantern Season Two #1 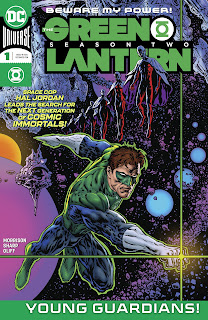 Can Hal Jordan save the universe once again?

The old Guardians of the Universe have decided to leave the fate of everything on Hal's hands and now he will have to find a group of Young Guardian to put everything in order.

A new Season has begun and I wasn't sure what to expect here. I have expressed in the past how Grant Morrison's The Green Lantern Season One started pretty strong and could have become one of the best books of last year if it wasn't because most of the latter half was about setting-up a finale confrontation which even ended-up being a set-up for yet another book and that one didn't even start as well as its predecessor.

And to be honest, this book doesn't start as well either. The ramifications of the last couple of titles are implemented here with a brand new universe being (supposedly) created and Hal being seen as the hero he is. This all leads to a constant presentation of different concepts that Morrison is going to implement over the course of this new book but I feel is lost here, I felt like the best parts of The Green Lantern where when they were dedicated to character work and emotional moments which sadly are very few here since Morrison prefers to focus on themes instead.

Is not like there aren't character scenes here though since there are but they're not as interesting you would expect and they're still lacking compared to the avalanche of ideas that are introduced here and I don't think this is the best way to make readers invested in an opening chapter. There are also fun moments like DEATH-GORILLAS but it all mostly seems like a set-up for what's about to come.

Liam Sharp's artwork is pretty fitting for depicting the most bizarre aspects of the story and, while his storytelling is usually not the best, he still follows Morrison's style appropriately.

Not bad, not great, but hey, the Blackstars book didn't start well either and it became more interesting towards the end so maybe, just maybe, this will have the reverse effect of Season One too.
Publicado por Comic Obsessed en 06:01