Some thoughts about Batgirl #44 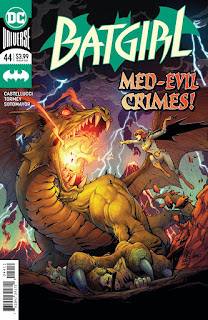 Can Batgirl find the strength to win?

The Maker of Unearth has unleashed a dragon who can only be defeated by the power of love, the problem is that the only people involved are Barbara and Jason.

That's right, this is a story about how an evil is defeated by the power of love.

And that in and of itself is not necessarily a terrible thing. Sure, it's a goddamn cliche that I would even dare to implement in any story these days but still, anything with the right execution can be salvaged. Unfortunately, Cecil Castelluci doesn't have it here and hammers the whole theme with multiple mentions of "love" over the course of the issue which reminds me of how heavyhanded things were during her Female Furies series.

Oh, but that's not even the worst part! You see, the Maker has been trying to save his former lover from cancer and Barbara decided to take that choice away from them due that she wants to save Jason just because she suddenly had a boner for him, and I don't think I'm exaggerating things considering that she mentions how hot, funny and whatever he is, pretty much leaving an old lady to die a, let's be honest, slower and more painful death.

Cian Tormey handles the art and is serviceable with clear storytelling but not particularly beautiful.

One of the weakest issues of this run yet and reminds me too much of the terrible Female Furies in terms of craft.
Publicado por Comic Obsessed en 15:25