Some thoughts about Wonder Twins #8 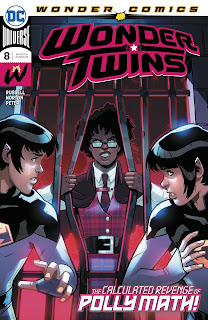 Can the Wonder Twins fix their mistakes?

Jayna can't help but feel guilty after putting her friend in jail no matter if she was a supervillain and now she's ready to help her one way or another.

A new installment is here and sadly I still feel that Mark Russell is exploring overly-simplistic ideas.

This chapter deals with the ramifications of Polly Math being in jail and it just goes as well as you might think. For one, Russell continues to explore this theme about how "there's no black and white, only grey" which is an idea that has been done to death in the last decade, and now that we're ending this decade that idea is just buried, I swear to God that it would be much more innovative if a writer dared to say that there's actually black and white but alas that's not the case.

You see, Jayna is feeling culprit for what happened to Polly and I don't know why. Yes, Polly became a supervillain for reasons that escaped her control but she still commited crimes and she had to end-up in jail, that's just how things work. Jayna wasn't even the one who put her there so I don't understand this whole sense of guilt. There's also another theme about fixing mistakes which works fine enough but again, is not the really the big focus.

Mike Norton handles the art and he does a good job at replicating the cartoony style that Stephen Byrne established for the series.

Aside from that, go back to your more complex work Russell.
Publicado por Comic Obsessed en 16:49