Some thoughts about Lex Luthor: Year of the Villain #1 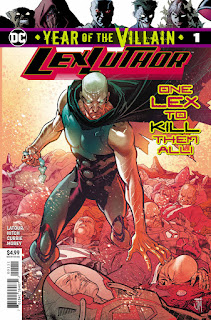 Lex has been following Perpetua's orders now but there's something that forces him to learn more about the most important person for him.

Another Year of the Villain tie-in appears. I have mentioned before that I'm not a fan of this event and especially of this take on Lex Luthor since I feel like it goes completely against what the character represents. Then again, this one-shot proves there's still some of the classic Luthor here.

Jason Latour handles this standalone story to show Lex's journey through the Multiverse to learn to find more of his multiple selves. Fortunately, Latour doesn't focus on the already tiring concept of Perpetua and instead decides to investigate who Luthor really is by exploring the different Earths and how each one of them create a different Luthor. Is pretty cool that the writer references some of Grant Morrison's concepts like Superdoom while also creating an Earth where Lex Luthor is Batman of all things, the amount of creativity is really admirable.

The character work might be even better due that this allows Lex to reflect on himself and show how his own ambition continues to be his strongest yet weakest aspect which ultimately leads to his always rivalry with Superman and how he might never get over it.

Bryan Hitch handles the art and is solid with expressive characters and classic widescreen storytelling.