Some thoughts about Batman #77 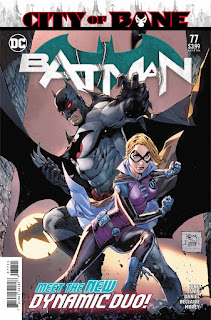 Robin believes he can save the whole city on his own but even his best efforts might not be enough to face Bane.

This issue is worrying not gonna lie.

Tom King offers a new installment and is pretty much what you can expect from him. There are a few things that make you raise an eyebrow like Damian quickly defeating Gotham Girl since this pretty much makes the defeat that Captain Atom had in the last issue even more humilliating and I just don't buy that with the right plan she could easily fall although taking her out of the story is kind of a blessing because of how awful her dialogue is. Then again, you have a few aspects that kinda salvage this like Damian's interaction with Thomas Wayne which is compelling enough despite of a few awkward lines.

The worst part comes nearly at the end though with the apparent death of a classic member of the cast and I really, REALLY hope this is all fake since King hasn't used that character properly during his tenure on this book and we all know that he hasn't earned the right to kill such an important part of the Batman mythos.

Mikel Janin and Tony Daniel handle the art and is really beautiful during their respective segments with a great sense of storytelling.