Some thoughts about Inferior Five #4 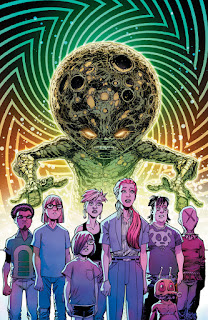 Can the Inferior Five escape this bizarre world?

Strange creatures are appearing and destroying everything on their path, including people and the reasons are yet unexplained.

Yes, things are still unexplained and Keith Giffen even makes fun of that.

I've already mentioned before how this series should have started with more answers or at least more engaging moments to invest readers on it but at this point is too late since the series has been cancelled and reduced to 6 issues. Last chapter at least tried to give some revelations but this one is back to norm presenting more questions than anything else.

And yes, Giffen actually realizes that and says that "some" answers will be offered and again, is too little, too late. Plus, as I mentioned in the past, Giffen is just too fixated into revamping characters he considers "lame" which is pretty obvious here for how different the Inferior Five are from their classic incarnation but also he describes a few characters like The Red Bee like that and I don't even see the point of it.

Giffen's art is fine, rough but it follows the story appropriately.

Jeff Lemire's Peacemaker segment is rather short this time but at least is more interesting and offers a bigger insight than the main one. His art is also fitting for the tone.