Some thoughts about The Flash #87 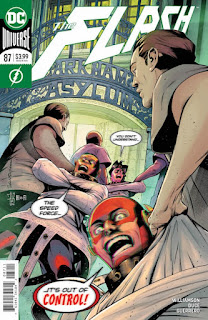 Can The Flash escape Arkham Asylum?

Barry and Captain Cold have been taken to Gotham City but not for long since one of them is not willing to stay.

To answer the initial question: Yes and very easily.

Joshua Williamson opens a new storyarc where he continues to explore the dynamic between The Flash and Captain Cold and I believe he does a better job here than during the last arc. Particularly because of how the relationship they had with their parents contrast with each other which allows for a nice moment of characterization. The plot progresses at a nice pace with the next arc opening pretty quickly and presenting an imposing new enemy.

Not a perfect chapter though since again, Barry and Cold escaped Arkham so fast that it makes me wonder what was even the point of taking them there. Sure, Barry's abilities were put in control but at the same time this could have happened everywhere else. It seems like plans changed somewhere because this was rather pointless.

Christian Duce handles the art and again, not my favorite Flash artist but his style is detailed and tells the story clearly.