Some thoughts about Young Justice #8 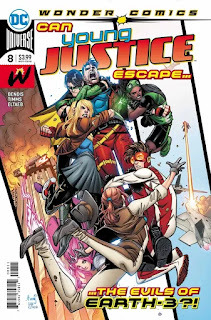 The team continues to be lost in the Multiverse and this time their travels will take them to the worst possible place where their own selves might try to kill them.

This actually turned out better than I expected.

I wasn't really anticipating this issue featuring Earth 3 after how badly Brian Bendis handled the Crime Syndicate during his Superman run. That being said, here he actually does a better job due that he creates an evil version of Young Justice and can pretty much do whatever he wants with their characterization since they're brand new characters and is pretty fun to see antagonists like Luthor-El, Speed Zone and the appropriately named Drake.

Plus, the classic "evil universe" theme of Earth 3 is decently explored here with each character from it reflecting such idea and there's a lot of fanservice too since there are other characters like alternate versions of Stephanie Brown and Snapper Carr appearing (and it makes me wonder if Bendis is planning to do something with Snapper in the future considering his history with the team).

John Timms handles the art and is good looking thanks to his semi cartoony and flexible style that gets the best from expressions and fight scenes.