Some thoughts about Transformers #3 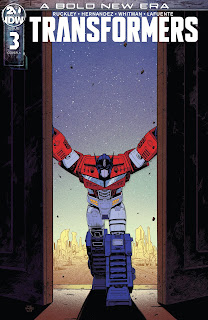 The conflict is escalating.

The murder of Brainstorm has caused both sides to start acting in their own way and in Megatron's case, it means to start recluting dangerous individuals.

Things continue to be consistently improving.

Brian Ruckley offers a new installment where he explores more about the ramifications of the recent attacks. I really enjoy the idea about how the rise of the Decepticons might not be Megatron's fault after all but instead, the mysterious being who is threatening all Cybertronians which ultimately forces him to ally himself with known psychopaths like Quake.

Speaking of which, who could have known that a Generation 1 nobody like Quake would actually play a semi-important role here? That's not the only example of characters coming back in interesting ways, for example Froid, the psychotic psychiatrist that James Roberts created during his Transformers work, is back and apparently less evil. Other familiar figures like Sentinel Prime and possibly Nominus Prime are also mentioned which gives us a bigger insight about this new universe.

This also contributes to the worldbuilding due that we see how some Cybertronians live and are different from each other while a bit of history is also brought into the plot which makes this Cybertron interesting so far.

Angel Fernandez and Cachet Whitman share the pencils and their work is solid, their styles are a bit too distinct from each other's at times but they still function appropriately.