Some thoughts about The Terrifics #15 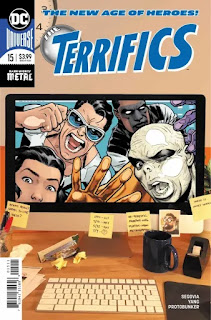 Can the Terrifics face a bigger threat?

Michael is glad to have his wife back but being from a different dimension bring its own sort of problems and that's without counting they have to fight God himself now.

I was honestly not expecting this series to last as long as it did nor that Jeff Lemire was going to be replaced by Gene Luen Yang in writing duties but in retrospective it makes sense. Lemire's last issue felt like a proper finale for his work on these characters and brought the definitive "family" feel this book requires, Yang also demonstrated a good handle on this team during the last Annual so the potential is there and this initial story is also interesting enough.

Yang builds from what Lemire established like the return of Michael's wife, appropriately named "Mrs. Terrific", and how their new dynamic should work. Yang doesn't shy away from complicated aspects like the fact that they being from different universes mean they're not the same people they married and loved but they're willing to give it a try, at least Paula is. I just hope this doesn't end with them being separated because of this reason due that it would disregard the great ending Lemire created.

The plot is centered around the idea of God as well and how Paula learned to believe in him while Michael didn't which presents and interesting dynamic and theme, especially once they learn they're being attacked by God which is bound to put Michael's beliefs to test.

Stephen Segovia handles the art and is really solid with beautiful characters and clear storytelling.