Some thoughts about Heroes in Crisis #8 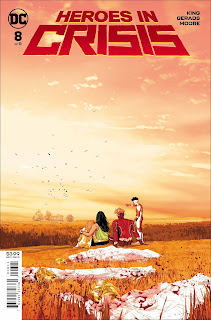 Who is the murderer?

Wally West has been losing control of himself since the loss of his family and Sanctuary could make things even worse for him.

It can get worse people, it can get much, MUCH worse.

And I say this as a person who honestly wasn't expecting things to get worse.

Tom King delivers the penultimate chapter of this terrible event by finally revealing the culprit of the murders and, let's not beat around the bush, it was Wally.

That's bad isn't it? But let's say what makes it worse.

It turns out that Wally has been grown paranoid inside of Sanctuary because he thought he was the only hero there and the others simple sent him away and thus that made him break into the info of all the different heroes who were being treated into that place. Okay, where the F*CK does this characterization come from? It was bad enough that Wally was portrayed as mentally weak to be put in Sanctuary in the first place but now we're lead to believe that he started to have a huge lack of self-confidence to think that his own friends and colleagues just put him there to get rid of him. The main problem is that Wally's tenure as The Flash was about gaining the confidence to become his own man and hero and thus, this issue pretty much destroys years of development.

Oh, but it get worse.

King has now retconned that Speedsters need to control their power at every time or else big disasters could happen and that was pretty convenient since now a deranged Wally accidently killed all of his friends inside of Sanctuary. This doesn't make any sense from the history of the Speed Force nor how all the different Speedsters have been using their abilities over the years, King just made an unnecessary and stupid change to make Wally the murderer.

BUT, believe it or not, that's not even the worst part.

Wally actually decided to inculprit both Harley and Booster of the murders he committed and he's now planning to kill himself for it.

And that, THAT is where the story gets unsalvageable. I mean, it was unsalvageable before but this makes it irredeemable. You're telling me that Wally West, one of the purest superheroes there is, would falsely accuse others of crimes that he himself committed?! NO! That's just not possible, this can't be Wally West, this must be some sort of evil and weak version of a different reality but in King's story, that's clearly not the case. This is King's Wally, a pathetic, broken and cowardly man who would betray his friends and moral code for basically nothing.

Mitch Gerads and Travis Moore handle the art and is good but the story is bad so it ruins their work.

This is probably the worst story of the year people. I don't think anything after this will be this bad. This is pretty much Wally West's Emerald Twilight except somehow EVEN MORE insulting.
Publicado por Comic Obsessed en 04:49