Some thoughts about The Flash #69 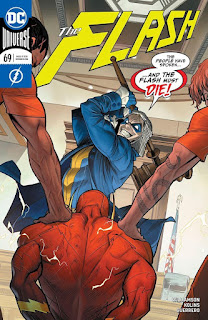 Is this the greatest trick in Central City's history?

The Trickster has apparently cut off Barry's legs and his only hope is to remember why he wants to protect his city.

This story comes to a conclusion and does it a pretty satisfying way.

Joshua Williamson offers the final chapter of this arc by giving closure to a few plot-points and opening new ones. This a story about The Trickster as much as The Flash's due that James gets a huge focus where is revealed that he doesn't want to impress Central City as much as he wants to impress his parents which is something that I saw coming since the beginning but is logical all things considered and also leads to James' own realization that they never really cared about him in the first place and why he cares about money so much.

Barry also realizes that he needs to work around his own doubts to save his people which manages to create a good development for him. Most importantly though, all of this culminates in a surprising moment at the end which perfectly sets-up the upcoming Year One storyline.

Scott Kolins handles the art and is really detailed with that classic Flash vibe that is so prevalent in his work and a lot of expression.