Some thoughts about Freedom Fighters #5 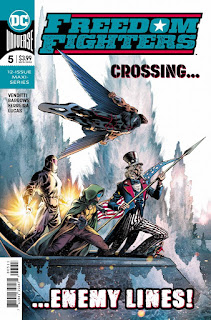 Why did the Freedom Fighters lose the last war?

Uncle Sam is back but he can't help but remember why he disappeared last time and that force is about to come back as well.

Another issue, another solid read.

Robert Venditti delivers a new chapter where he tells the return of Uncle Sam. There are a few revelations concerning his disappearance including who was the person who won the war for the Ratzis and how Uncle Sam saw America before. There's an interesting amount of social commentary which makes a lot of sense considering that Sam has seen a lot of bad in America's history and how they used to help only people in power but at the same time he can see the potential of his nation and that definitely doesn't fall into Nazi's hands.

There's of course, the appearance of Overman whose presence has been pretty prominent pretty much since the beginning despite that he was never really shown in person until now. Is a pretty logical addition to the Freedom Fighters mythos that their ultimate enemy is a Nazi version of Superman and he definitely brings a new level of threat to the story.

Eddy Barrows handles the art and is still pretty detailed, full of expressive characters and a somber tone.