Some thoughts about Suicide Squad #5 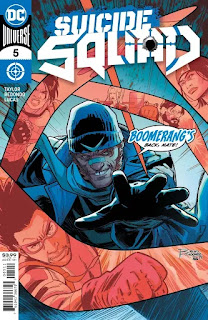 Who is truly controlling the Suicide Squad?

The team has been asked to hunt Captain Boomerang but what should concern them the most is who is actually handling all these orders.

This chapter offered some revelations and I still don't know what to think of them.

Tom Taylor continues his story about the old members of the Squad trying to work alongside with the new ones for the sake of everyone. The first half concerning the hunt for Boomerang is solidly handled with good action and character moments here and there, at first I thought that Taylor was still giving his recently-created characters the spotlight once again but then BAM! Deadshot actually gets a good moment as well.

Then the big surprise comes towards the end when we see Lok's actual boss and this is... shocking. The thing is that while is indeed a typical Taylor shock value moment, it makes you scratch your head once you start thinking about it since after all, this is one of the purest superheroes there is, a hero who prefered to die before being corrupted in the previous continuity and thus, makes me think that this is another instance of Taylor not understanding a character.

Bruno Redondo's artwork continues to impress with beautiful and expressive characters along with strong action scenes.

Mixed thoughts, not sure if I'm into what's happening next.