Some thoughts about Prez #2 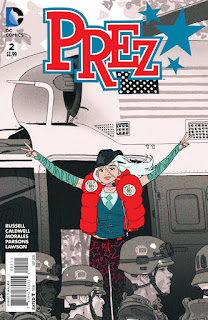 Being President could be more ridiculous than anyone could have imagined.

Beth still doesn't know how to react about the idea of her leading a nation but she will need to since the Government might be too incompetent to be trusthworthy.

Yeah, this actually worked much better for me.

Mark Russell delivers a new issue where he doesn't pull any punches and decided to full satirical about different aspects being either politics, religion, etc. It certainly presents a quite hysterical read.

It's especially funny when he portrays some politics just as excited teenage girls (which strangely contrasts with the main character) and the rest of the Government as a simple fight between delusional and creepy people.

It's also worth mentioning that the author finds a way to incorporate Preston Rickard, the original Prez , into the story and it makes a lot of sense all things considered.

Ben Caldwell shows his skills in pencils with pretty unique and creative style that definitely exploits this silly premise and world.

Great issue, one of the most enjoyable this week.
Publicado por Comic Obsessed en 07:16