Some thoughts about All-New Hawkeye #4 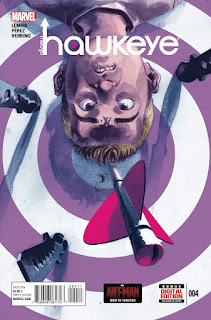 What happened to Hawkeye in the past that connects it to the present?

When he was a kid, the only thing that Clint and his brother wanted was to survive but each one of them had to find their own way to do it. Things won't change once that they reach adulthood.

Once again, this was a quite impressive issue.

Jeff Lemire continues his story in this title by giving a bigger emphasis to the past segments that develope the relationship between the different people who influenced his childhood being either the owners of the circus, the Swordsman or his own brother and all those sections are wonderfully portrayed.

Clint's relationship with his brother is especially good because it's believable, Barney and him obviously care for each other but they're pretty different in their beliefs and the way how they go through life and creates a pretty interesting contrast with their present selfs.

Speaking of contrast, the flashbacks work perfectly along with the present segments that despite that they're not as prominent, they still serve a great perspective from all the different events.

Ramon Perez is one of the biggest factors of this issue's success due that he's able to change his style for the two sections that bring an unique experience in their own way.

Excellent issue, one of the best reads from this week.
Publicado por Comic Obsessed en 10:13