Some thoughts about The Flash Annual #4 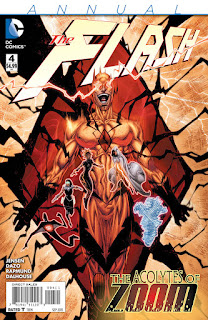 How did Zoom manage to get his own army?

Over the course of the years, Eobard Thawne has been recruiting several people with abilities similar as his all to be able to fight The Flash but he has never told any of them his true intentions.

Okay, some things worked, others not so much.

Van Jensen is in charge of this issue by itself and he comes up with a backstory for all the characters that Zoom has been working with recently and while most of them seem somewhat interesting, the most important character from here is left unexplored and that's sadly Zoom.

Sure, the way how he handles things is interesting (and actually present him as a quite manipulative and calculating man) but at the end, his true origins are not touched and I think this could have been the right time to learn more about them so it makes the Annual a disappointment.

There are other problems though since every ability here seems connected to the Speed Force which by itself is not a bad idea but I wish there was more variety about how their powers were developed. Also, an old Rogue is reintroduced and sadly he's not as interesting as he was before.

Bong Dazo is on art duties and his work manages to have a similar tone as the one that Brett Booth has so there's no discrepancies in styles. The story is well followed for the most part too.