Some thoughts about New Suicide Squad #10 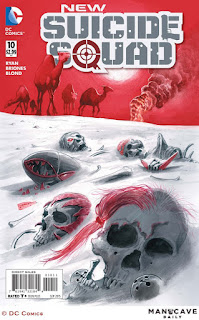 The Suicide Squad is currently trapped and they might need the help of a new team to escape.

The most recent mission is not going as well as they expected and now Deadshot, Captain Boomerang and Black Manta have nothing else but do whatever their captors want, no matter if that means killing each other.

Well, this title continues and while this is not as bad as previous issues is far from impressive.

Sean Ryan arrives with a new chapter where he gives each group of characters a moment in the spotlight. From Harley Quinn training the new Squad to Amanda Waller and Vic Sage fight for the control of the team to the captured Squad having to follow the orders of the enemy, etc. It's fair to say that the issue covers enough.

However, again, that's not enough to be engaged. Some of the characterization works fine like (surprisingly) Harley's and Captain Boomerang who actually shows a likable and everyman-ish portrayal but aside from that neither the themes nor the content are something worth noticing. Plus, the story is not exactly moving at a fast pace.

Philippe Briones handles the art and his work is solid, not particularly impressive but solid enough.

And that's it, the issue is merely decent and I still can't recommend it considering we had much better books this week. Don't bother with it.
Publicado por Comic Obsessed en 10:57